Sabarimala is a very significant Hindu temple situated on top of a hill in the Pathanamthitta district of Kerala. The hill is surrounded by 18 other hills and is a part of the Periyar Tiger Reserve. This temple is dedicated to the God of growth, Ayyappa. Every year, this temple attracts many pilgrims from various states of India and even parts of the world. Most of the pilgrims would be from Kerala, Karnataka, Tamil Nadu, and Andhra Pradesh. This temple would open for worship only for the days of Mandalapooja which comes between November and December, Makara Sankranti on the 14th of January, Maha Vishuva Sankranti on the 14th of April, and for the first five days of every Malayalam month. People can purchase their tickets through the Sabarimala online tickets facility.

The popular myth of Ayyappa is connected to the royal dynasty of Pandalam. The King and Queen of this dynasty tried their best to have children. According to the story, when the King went hunting, he found a baby crying alone by the riverside in a forest. Upon inquiring, a sage advised him to take this crying baby home as his son, which the King followed. This child, Manikanda, grew up as the prince of the dynasty.When he was twelve, the Queen developed an illness and the doctor who treated the Queen advised her to drink tigress's milk to treat this illness. While no one accepted this responsibility for bringing milk from a tigress, Manikandan happily volunteered. While returning to the Kingdom, he not only brought her the milk but also rode the tigress along with her several cubs. The royal family realised that he was an extraordinary child and according to the lore, the prince is said to have expressed his desire to abandon the kingdom and become an ascetic. The King later builds an incredible shrine for the boy on top of Sabarimala, where Manikandan became Ayyappan by acquiring a divine form.

The Pilgrimage and getting there

The pilgrims who wish to see Ayyappan has to reach the temple through lots of complicated treks in the forest as there is no provision for vehicles to enter the area. They have to observe celibacy for about 41 days before going to the temple. The pilgrims are also required to strictly refrain from alcohol, follow a lacto-vegetarian diet, never use profanity, and let their nails and hair grow without clipping or cutting them off. They are also expected to visit local temples regularly and bathe twice a day. They should wear blue or black clothes, not shave until their pilgrimage is completed, and apply sandal paste or Vibhuti on the forehead. They must try their best to help others and see everyone and everything around them as Ayyappan. 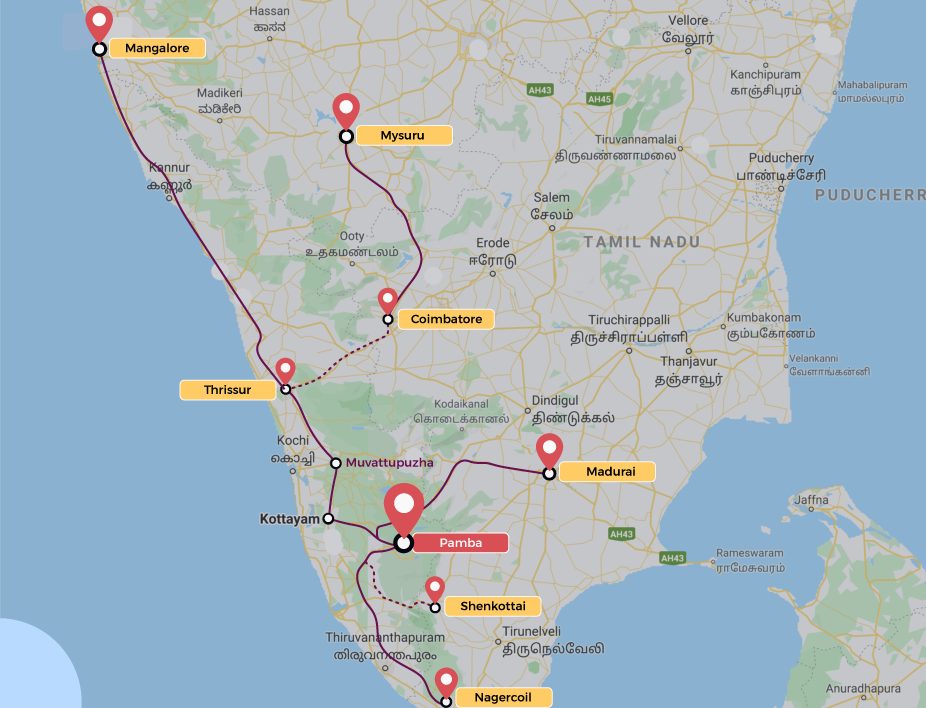 Millions of people every year still follow the original route to Sabarimala temple which is through the mountainous forest path from Erumely, 8 km from Chalakayam, and 12.8 km from Vandiperiyar. The popular belief is that Ayyappa took this route himself. This route starts from Erumely to the Aludha River, and then pilgrims reach Karivalam thodu by crossing the Alutha Mountain. The sacred Karimala is the first point that's passed, followed by the Cheriyanavattom, Valiyanavattom, and the Pamba River. Pilgrims should climb the Neelimala and get into the Ganesh-Bettam and Shreerama-Betta Padam. After this comes the famous Aranmula Kottaram, one of the most popular stops during the holy journey of Thiruvabharana Ghoshayathra.

How to reach Sabarimala by bus


Sabarimala is where the famous Ayyappa temple in Kerala is situated. The temple is atop a hill where the only way of reaching is by foot. Buses and cars are the primary way of reaching the nearest spot to start the climb. Here you will see how you can reach Pamba, the base place where you start your climbing from.


How to reach Sabarimala from Bangalore


Bangalore to Sabarimala is 613 km by road. During the peak season in November-January, there will be plenty of Kerala RTC buses operating on this route. There are other private bus options on this route to Erumeli and from there you can easily find Kerala RTC buses to either Nilakkal or directly to Pamba. The average bus fare from Bangalore to Sabarimala would be INR 1200 and will take approximately 11-13 hrs.


How to reach Sabarimala from Trivandrum


From Trivandrum, you will travel for 106 km to reach Sabarimala. The bus services are available to Pamba at an average ticket fare of INR. 211. You can find KeralaRTC buses for reaching here and they are available at regular intervals. If you are coming from other states, you can arrive at Trivandrum airport and then take a bus.


How to reach Sabarimala from Chennai


The Chennai to Sabarimala bus travels for about 13 hrs on this 534 km road. The direct buses are mainly operated by YBM Travels. You can find the Kerala RTC buses anywhere from Kerala, in case you didn't get a direct bus from Chennai. The closest option is to reach Kottayam and then another bus to Pamba.


How to reach Sabarimala from Hyderabad


For those coming from Hyderabad, the best option is to travel by train to Kottayam and then take a bus to Erumeli, Pamba, or Nilakkal. The train journey itself is going to be a long one, approximately 20-22 hrs. SO the total travel time will be close to 30 hrs. The distance from Kottayam to Pamba is 43 km and an average ticket fare of INR 60. During the season, you may also find direct buses from Hyderabad to Sabarimala operated by APSRTC .

Q: How far is Sabarimala from Trivandrum Airport?
A: Sabarimala is 190 km away from Trivandrum Airport and a travel time of 3-4 hours. From the airport, you can opt for a cab or take a bus to Pamba. There are plenty of Kerala RTC buses from Trivandrum to Pamba or Nilakkal.
Q: What is the impact of lockdown at Sabarimala?
A: Under the lockdown, the temple is functioning with daily pujas and rituals happening. But the public entry is banned until further notice. As the number of Covid patients is on the rise, the state government has decided to restrict the entry of devotees to all religious centres.
Q: What is the best way to go to Sabarimala?
A: The best way to go to Sabarimala is by bus or hiring a bus. Taxis or cabs can be more convenient but very expensive in comparison. Since there are several buses available regularly, there is no need to pay a higher sum for a taxi, especially if you are coming from another state.
Q: What is the average bus fare to Sabarimala?
A: The average bus fare on Pamba buses will be between INR 40-75 for the buses from Nilakkal to Pamba. The bus fare on the buses bound to Pamba mainly depends on the distance it is travelling. Anyways, the average ticket rate ranges at INR 500 when you are taking a bus from Kerala. The long-distance buses from other states will be available in the range of INR 900-1200 onwards.