Known as the “Spiritual Capital” of Andhra Pradesh, the city of Tirupati is famous and popular among the people for the Tirupati Balaji Temple. The temple is dedicated to Lord Venkateshwara, another form of Lord Vishnu, and is believed to be the place where the Lord turned into an idol and stayed there forever. Hence the Tirupati temple is highly revered and is an important place of pilgrimage for the Hindus. The city of Tirupati is an ancient city and has been mentioned in the religious books of Vedas and Puranas.

Opening hours: 18 hours every day for Sarvadarshanam and 20 hours during peak days

The popular Tirupati Mandir is situated on top of the Tirumala Hills in the district of Chittoor in Andhra Pradesh. Abode of Lord Balaji, also referred to as Govinda or Venkateshwara, the Tirupati Temple is the place where Lord Vishnu is believed to have appeared to take away all of mankind’s Vaikuntam and the presiding deity Lord Venkateshwara is referred to as the Kaliyuga Prathyaksha Daivam. The Tirupati Temple is also known as the “Temple of Seven Hills” as it is situated on the seventh peak of the seven Hills in the Seshachalam Hills range known as Venkatdri.

The construction of the Tirupati Balaji Temple started in 300 AD with contributions from numerous rulers. However in the 18th century, Raghoji I Bhosale, the Maratha General planned out a ruling body who would look after and carry out the daily proceedings of the temple; this leads to the development of Tirumala Tirupati Devasthanam in 1933, a Trust which manages and maintains the Tirupati Mandir and many other temples in the area.

Constructed in the Dravidian style of architecture, the Tirupati Temple has a Garbhagriha, also known as the Ananda Nilayam, where Lord Venkateshwara is in the standing posture and facing east. One among the eight Vishnu Swayambhi Kshetras and is said to be the last Vaishnava Divya Desham (one of the 108 Vishnu Shrines which have been mentioned in the works of the Alvars.

Every year Tirumala Tirupati Devasthanam receives millions of devotees from India and abroad and to make their pilgrimage a comfortable one. The temple management has come up with free accommodation halls, numerous lodges with affordable rooms on rent, free meals around the clock, hair tonsuring outlets, and queue complex with volunteers to facilitate easy flow of pilgrims for the Lord Venkateswara Tirupati darshan. There are also free bus services for the devotees within the TTD premises.

Owing to the rush of pilgrims every day for Tirupati darshan, the temple management has come up with an official portal tirumala.org through which devotees from anywhere in the world can make the Tirupati Darshan booking online.

Apart from the Tirupati Darshan booking, devotees can book accommodations at any of the choultries within the Tirumala Tirupati Devasthanam premises. Other than these, devotees can also book sevas, marriage halls and also buy prasadam.

Dos and Don'ts within the Temple Premises

Listed below are some rules that devotees should follow while visiting the Venkateswara Temple at Tirupati-Tirumala Hills.

How to reach Tirupati by bus 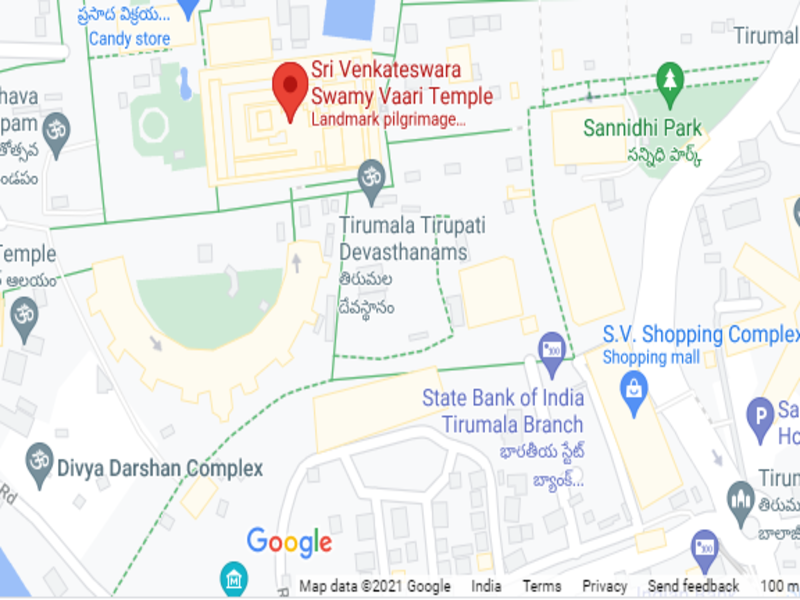 Tirupati is the spiritual capital of Andhra Pradesh, known for the Tirupati Balaji Temple. Every year, millions of people make pilgrimage trips. The best way of visiting here is by bus which is available from most of the nearby cities within the state and from the neighbouring states as well. Let us see how you can reach here from a few of the top cities in India.

How to reach Tirupati from Bangalore

There are plenty of options for a bus from Bangalore to Tirupati. The cheapest buses are available from APSRTC with a basic bus fare of INR 269. There are more than 90 daily buses. These buses mainly start from Ulsoor, Vidyaranyapura bus stand, Indira Nagar, BTM Layout, etc. Most of these buses have a live tracking system and have varying amenities, including beds. The first is available at 3.50 am and the last bus is at 11.50 pm. The travel time varies with each bus and ranges between 4 hr 50 min and 7 hr 20 min.

How to reach Tirupati from Chennai

The distance from Chennai to Tirupati is 133 km. The journey takes 2 hr 30 min to 4 hrs, depending upon the bus you choose. There are up to 45 buses per day on this route. The buses are available from 4.55 am till 8.55 pm. Each Andhra Pradesh State Transport Corporation bus starts from different parts of Chenna i and reaches the common destination of the RTC bus stand at Tirupati. The private buses have their sets of boarding and drop-off points. The average bus fare on this route is INR 200.

How to reach Tirupati from Rameswaram

You can reach Tirupati from Rameshwaram by a direct bus that usually takes more than 14 hrs to take an indirect route via Bangalore. You can find buses to reach Bangalore and then from there to Tirupati. The entire distance would be around 670 km. Both private buses and RTC buses are operating on this route. BUt only the APSRTC buses reach Tirupati as the others will reach only a specific point. The buses have different amenities from basic to luxurious. You can also find sleeper buses for a more comfortable journey.

How to reach Tirupati from Tirumala

From Tirupati to Tirumala you will get plenty of APSRTC buses. These buses are available at regular timings and costs anywhere between INR 55-200 depending upon the type of bus. You can book the tickets on these buses online. The total distance between Tirupati and Tirumala is 21 km.

To avail heavy discounts on package tours and online bus tickets, visit www.redbus.in and have a hassle-free spiritual journey to the holy town of Tirupati-Tirumala Hills.

Q: How far is Tirupati from Tirupati Airport?
A: The distance from Tirupati Airport to the Tirupati Devasthanam is roughly 39 km. The journey takes 1 hrs 30 mins to reach the temple from the airport. The average bus fare on this route is INR 45 for a single way and around INR 100-200 for a roundtrip. APSRTC operates all these trips between the airport and the temple.
Q: What is the impact of lockdown at Tirupati?
A: The lockdown in the state has affected the temple darshans but there are no major curbs. Devotees who have booked their darshan tickets in advance can still visit the temple on their specific day and time. At the entry points and the tolls, they can show their darshan tickets to be allowed to pass through. All shops in and around the temple will be closed by 12 pm.
Q: What is the best way to go to Tirupati?
A: The best way to go to Tirupati is by bus which will help you reach the maximum nearest point. Although cabs can take you even closer they are expensive, especially from other states and cities. The RTC buses are cheaper than the other options. You can travel with all the comfortable amenities on a bus and can even get a bed on them.
Q: What is the average bus fare to Tirupati?
A: The average bus fare to Tirupati depends on the distance and the city that the bus is coming from. The nearest big city to Tirupati is Chennai and the lowest bus fare from here is INR. 142 and that from Hyderabad starts from INR 1300 which can also go up to INR 3000.

Top Routes to Tirupati with redBus